Have you ever rushed headfirst into a relationship, only to find out two weeks later that the other person is horrified by your increased degree of commitment? Perhaps you scared them away by choking them with your communication and time.

Is it just the two of us? We promise it will happen. 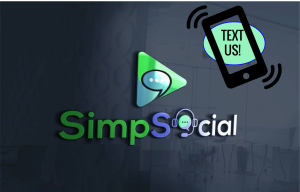 Marketers are in an intriguing position in the digital era. If you take up too much of a person’s time, you’ll almost certainly receive an Unsubscribe or Do Not Call request. If you try to be calm and allow your leads some breathing room, you can unintentionally drive them into the arms of a competition.

The key to long-term success is cultivating the appropriate kind of relationship with your precious leads. Naturally, the issue arises as to how this is accomplished.

A balanced diet of emails, phone calls, and text messages would lure leads into your open arms in an ideal world. However, as with most relationships, it’s probably best to start slowly and quietly.

Text messages are the quickest and cheapest way to communicate with your leads, costing between $0.01 and $0.05 per text (unlimited and included with SIMPSOCIAL  Packages). Furthermore, SMS has by far the highest open and response rates. In comparison to email, SMS has a 98 percent open rate, while email has a 20% open rate.

The response rates are similar, with SMS averaging 45 percent vs six percent for email.

When you consider that the typical person’s attention span is eight seconds, it’s no surprise that phone calls are difficult. In a couple of seconds, leads can quietly respond to an SMS. On the other hand, taking a phone call causes disturbance and, let’s face it, may be downright annoying.

That isn’t to say that phone calls have no place in the marketing world. Phone calls make sense once you’ve established rapport with those prospects and want to take the relationship to the next level. However, phoning too frequently or appearing on someone’s Caller ID as the dreaded “SPAM RISK” will put you dangerously close to communication hell.

Of course, how are you expected to handle when you’re running ad campaigns that generate hundreds, if not thousands, of leads per month? Pick the ones that pique your attention the most and move on, leaving a slew of others behind?

There’s no reason to ignore a lead who ignores your initial conversation with SIMPSOCIAL . Through the combination of hybrid intelligence and text messaging, we can keep up with any volume of leads for an extended length of time. There’s plenty of love to go around.

Our method combines automation and human intelligence to aid in the development of connections and the sale of more automobiles. We provide just enough automation to simplify operations while also allowing for enough human interaction to create rapport and address more difficult issues.

We want to assist you in taking your lead relationships to the next level. We give a “Done For You” solution that caters to your needs through text messaging and persistent follow up, whether it’s in the present or nine months down the line.

We can assist you in converting your next lead into a committed partnership.